The Fry Art Gallery’s retrospective of work by Walter Hoyle, Walter Hoyle: a versatile artist has been extended into the autumn of 2020 [the exhibition closed in November 2020 due to national COVID-19 restrictions].  The show is a rare chance to appreciate the full achievement of an artist who was central to the Great Bardfield scene during its 1950s heyday, became an influential teacher in Cambridge and, as a committed Francophile, spent an increasing amount of time in Dieppe. 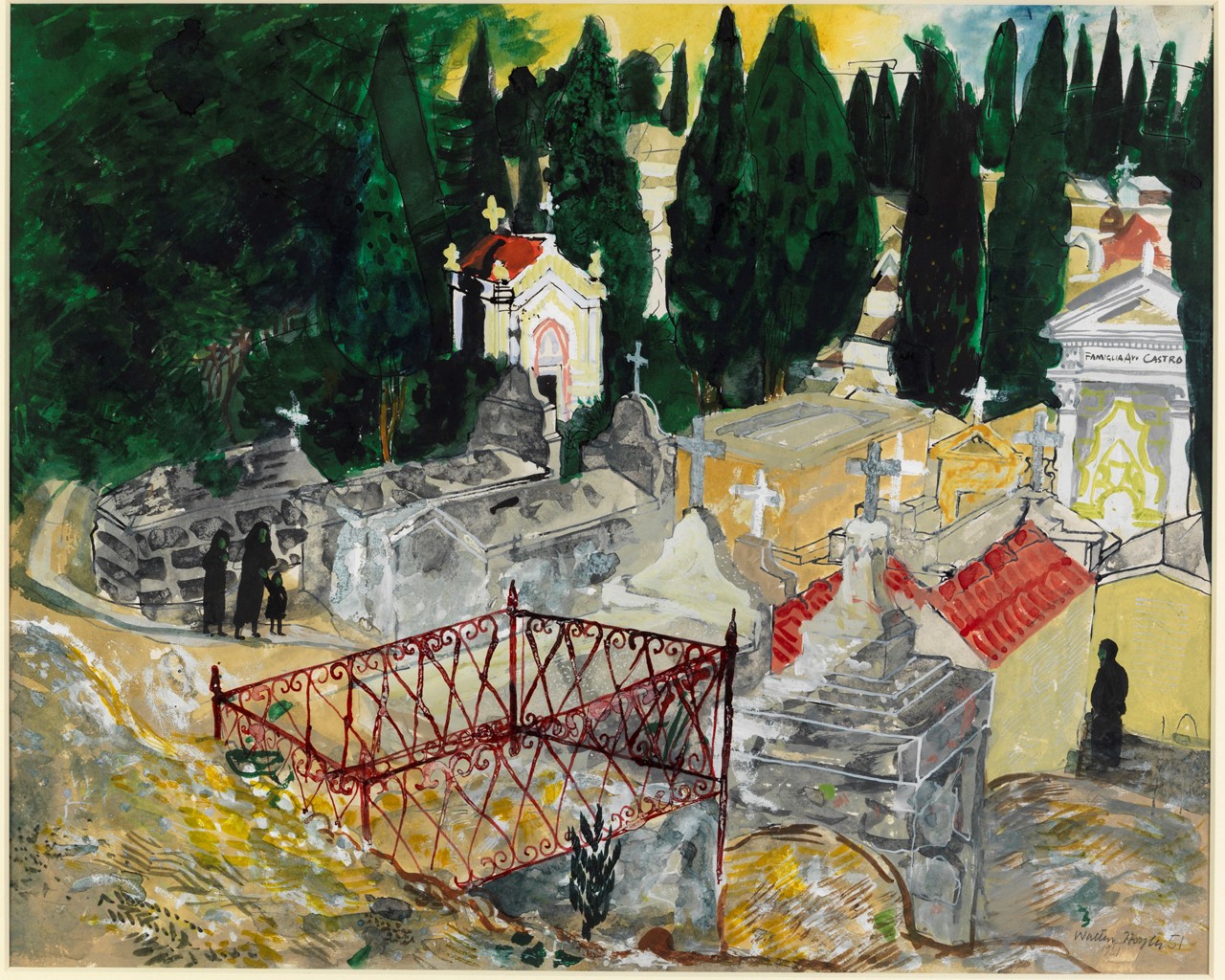 Many themes ran throughout Hoyle’s career, including a love of watercolour and of linocut, but the exhibition falls naturally into a chronological sequence.  After examples of his early works, created at the time when Hoyle’s studies at the RCA were interrupted by National Service, come a set of watercolours from a painting trip to Sicily that he made with Edward Bawden, formerly one of his RCA tutors, in 1951.

These are a remarkable set of works.  Vibrant colours, particularly in the skies, recall Hoyle’s expertise in gilding while each explores a different balance between landscape, architecture and figures.  In Cemetery at Enna¸ Sicily, for example, a jumble of graves and mausoleums dominate the sparse figures, but the focal point is an ornate, cast-iron balustrade. 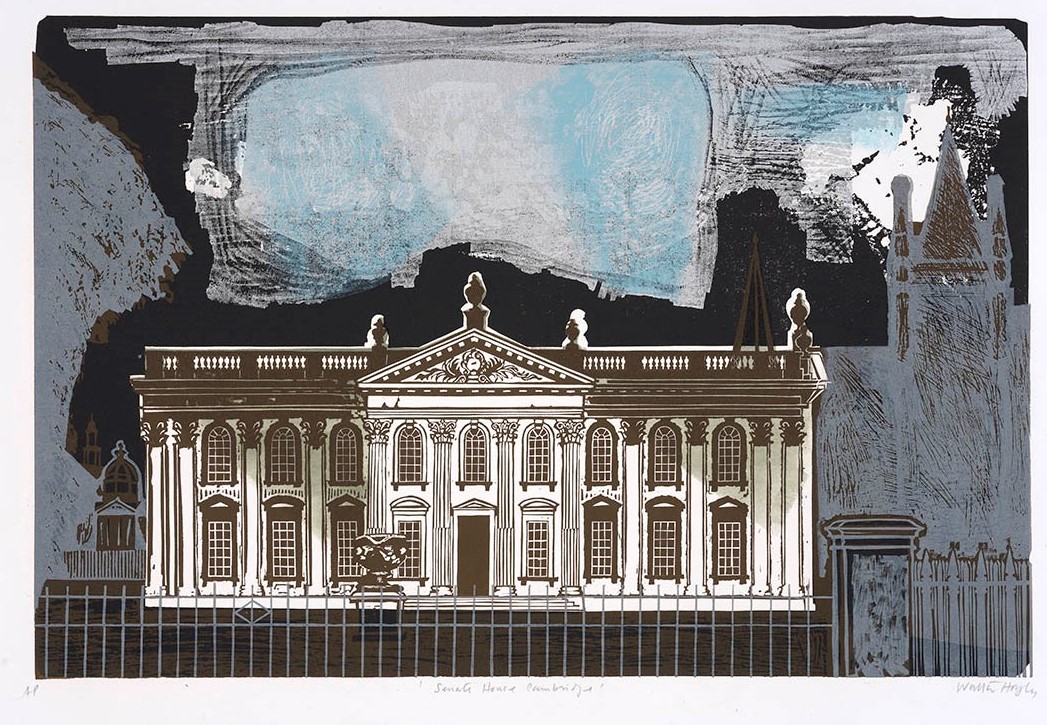 In the 1960s, Hoyle produced a suite of linocuts for the fashionable print publisher, Editions Alecto, of which five are on show at the Fry Art Gallery.  These pictures focus on Cambridge subjects, most juxtaposing closely observed architectural detail – this time without figures – against bold skies enlivened by a range of abstract effects.  One work that contrasts slightly with the others is Sundial, Queens College, where this one feature takes over the whole image, and a highlight of the exhibition is the inclusion of the original lino plate alongside the impression (intriguingly the plate shows a golden ink not seen in the 1966 publication, and which serves as a further reminder of Hoyle’s love of gilt).

Hoyle taught throughout his life, initially in London but from 1964 at Cambridge School of Art where he set up the printmaking studio.  Teaching print techniques may have been one factor that encouraged him towards creating semi-abstract works that experimented with print texture, in particular though complex adaptations of etching.  In these works, just as much as his representational pictures, however, the composition was tight.  The suggestions that a circle holds a weight that can distort its surroundings was a repeated idea in works such as Moon Shadow and Directions.

Versatility can help an artist adapt to circumstances and fulfil commissions, but it can be a hindrance in an art market which demands a ‘signature’ style.  The range on view in Walter Hoyle: a versatile artist also reveals constants.  In particular, there’s a continuous sense of Hoyle as simply good visual company – witty and sophisticated, but never overbearing.  It’s the wit which, in Bust in a Garden (1957), places a crisply realised classical portrait against the warped timbers of an Essex Barn. This linocut is itself used on the cover of the book, edited by Julia and Andrew Collins and published by Bread and Butter Press, which accompanies the exhibition and which is on sale at the Fry Art Gallery.  This includes a foreword by Walter’s wife, the artist Denise Hoyle, notes from Emma Mason and Martin Salisbury, a recollection from Chloe Cheese and a long and previously unpublished essay by Hoyle himself in which he gives his own verbal sketch of the life in Great Bardfield.  ‘If I were asked which were the best years,’ he writes, ‘I would not hesitate to answer those spent in and around Great Bardfield and Great Sailing.’

One thought on “Walter Hoyle: a versatile artist”

This site uses Akismet to reduce spam. Learn how your comment data is processed.